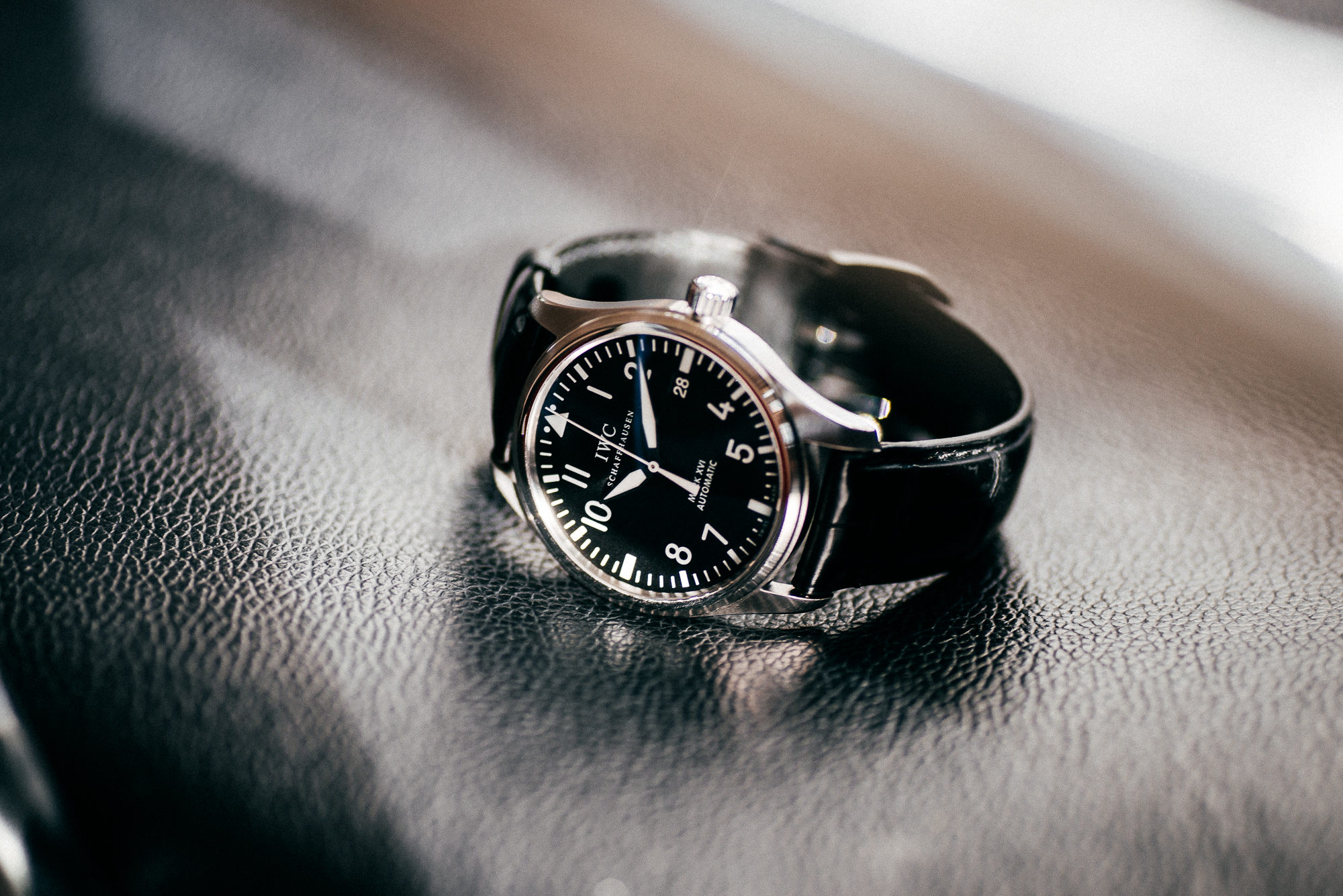 Watchmaking tradition is inextricably woven into the tapestry of aviation history. Indeed, this auspicious partnership stretches back to the very beginnings of manned flight, when pilot’s watches were already an indispensable tool during aviation’s nascency. Today you will find these watches worn with pride by pilots and watch enthusiasts alike, as they carry on the rich tradition of those early aviation watches. Be it a pilot’s watch from IWC, Breitling, or Sinn, you will find an extensive range of models offered by a number of brands. 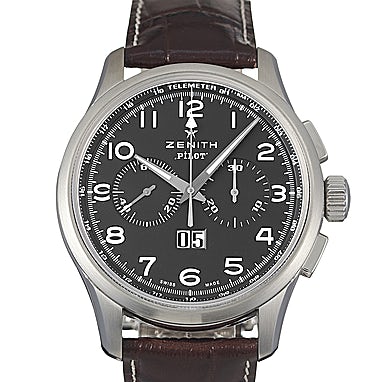 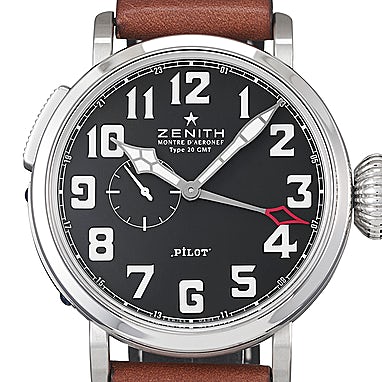 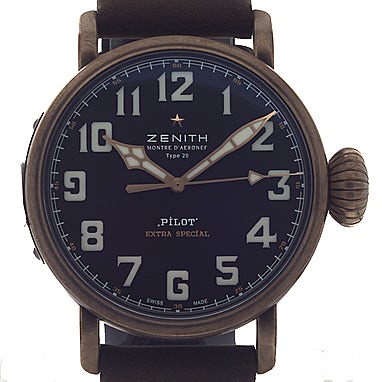 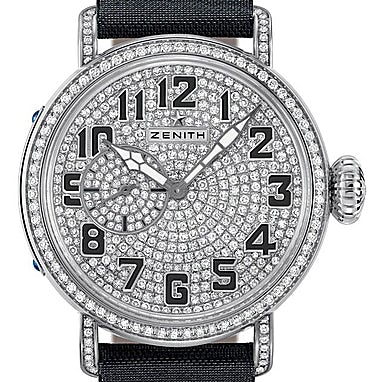 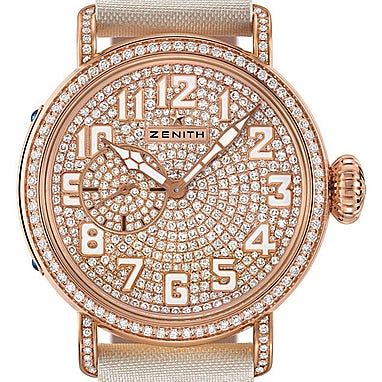 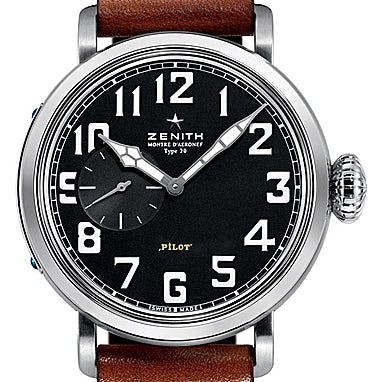 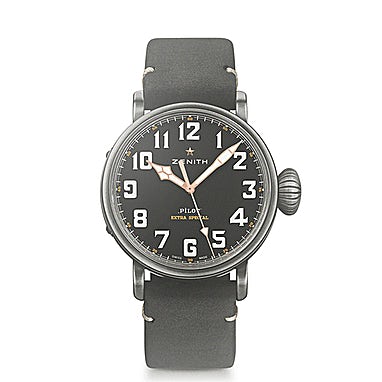 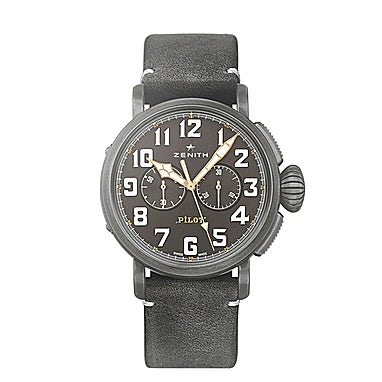 A look into the sky

An overview of pilot watches

Pilot’s watches are instruments designed to meet the requirements of aviation professionals , and as such provide far more than simple time-telling. More so in the early days of aeronautical pioneering, were these watches crucial instruments in the navigation of the skies. The pilot’s watches of the 20th Century are plentiful with impressive functions and complications, whether those are a second-time zone or an integrated slide-rule.

The most notable features of pilot’s watches are their resilience, shock-resistance, as well as the extended wrist-straps that fit appropriately over a pilot’s vest. These pilot’s and military watches were originally used by professionals in the field of combat, thus they had to be tough enough to weather the grueling circumstances their owners faced.

The pilot’s watch's journey through time

The history of the pilot’s watch is one closely bound with that of aviation. The developments in manned flights in the last decades have been some of the greatest technological breakthroughs in the 20th Century. The pioneers of aviation needed watches that were precise and also technically advanced, and the watch brands readily supplied these, looking to outsell their competition by manufacturing the most reliable pilot’s watches. It was with this ambition that the watchmakers of those days created more and more sophisticated aviation tools.

Soon after the first manned flights, the pioneers of air travel were in need of aeronautical tools, and the first ones were integrated into the dashboards of the early aircrafts. Many of these tools were in fact developed from the already well-established and widely used nautical chronometers. With the emergence of wristwatches also began the production of pilot’s watches that could be worn on the wrist. The watchmakers of the time zealously created new aeronautical instruments in their pursuit to be part of history in the making, as man braced the skies and explored the heavens.

It was Cartier who first achieved this feat, when they developed the Cartier Santos for the Brazilian aviation pioneer Alberto Santos Dumont in 1906. Other companies soon followed suit, and the popularity of the pilot’s and military watches spread, thus establishing a market for men’s wristwatches.

The first of the gentlemen’s wristwatches

At the beginning of the 19th Century the wristwatch was primarily worn as a piece of jewellery by women. Its functions at the time was far less as a device to tell the time, but rather served as an accessory. The design of the first pilot’s watches was the antithesis of the fine lady’s wristwatches. They were created to be functional and highly legible, thus, they were not adorned with jewellery or lavishly decorated. The design was pragmatic, often having longer straps in order to be worn over the jackets of pilots. The pilot’s watches of this day have not strayed from the utilitarian design of those from the past.

The crown on a professional pilot’s watch is designed to the needs of aviators, as they are often large, with grooves to provide extra grip in order to allow the pilot to adjust the watch’s functions without removing their gloves. Of notable importance are the sophisticated mechanics that provide for highly precise time-telling. Above and beyond this, a pilot’s watch should be legible under all circumstances, which is why the dials are created with contrasting colours of black and white. You will find most pilot’s watches having black dials, with large white luminous surfaces on the hands, numerals, and indices.

Most pilot’s watches showcase a tachymeter scale on the outer track of the dial or bezel. Together with the chronograph function, this allows the wearer to measure speeds of various moving objects.

One of the developments of the pilot’s watch came from Longines in cooperation with the pioneer Charles Lindbergh. What they created was a pilot’s watch with a rotatable dial for the use in astronavigation. Above all, the increased dangers of magnetism, harsh climates, and kinetic forces, called for watches that could resist the possible damage caused by these. One of the reasons mechanical watches remained the favoured choice of watch, for a long time after the rise of the quartz watch, was their resistance to kinetic forces.

Whilst pilot’s watches were a necessary tool in the early days of aviation, by the end of the World War I they were eventually replaced by onboard cockpit clocks and only used as secondary tools for individual tasks or by individual crew members.
But by then the pilot’s watches had left behind a legacy. Now, they are a symbol for the technical expertise that we as humans are constantly striving to perfect. They are watches that present the highest accuracy and resilience to extreme conditions. They inspire watch enthusiasts the world all over with their functional and sobering designs. And above all they inspire through their utmost reliability and accuracy when they are needed the most.

Although there is no clear line between pilot’s watches and other wristwatches, as military watches for example. Nevertheless, there are certain details and functions, that virtually all pilot’s watches showcase. 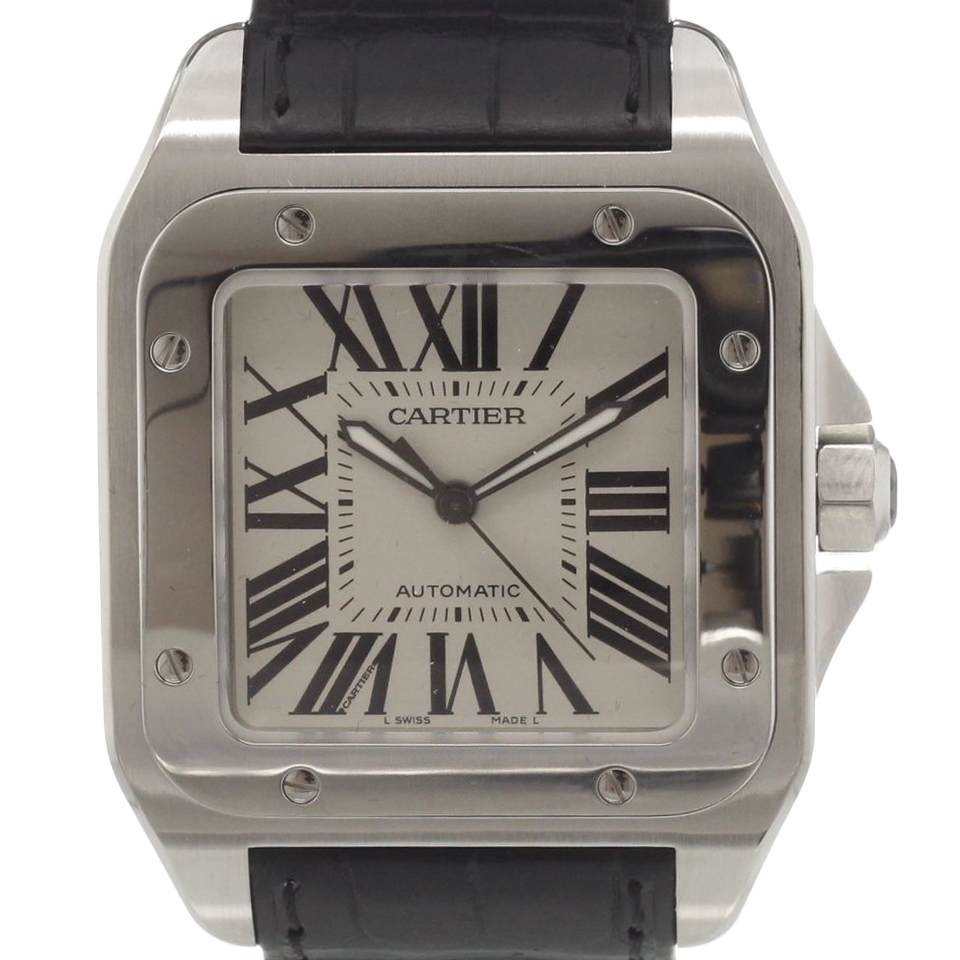 The IWC Mark XI is a veritable cult watch and was in manufacture from 1948 onwards until the 1980s. It was prized for its accuracy, which was tested under extreme conditions. Furthermore, the watch is fitted with a soft-iron cage, shielding it from magnetism. Another spectacular example from the brand is the IWC Big Pilot’s Watch, which distinguishes itself through its considerable size, placing it in a prominent spot in the collection of the manufacturer in Schaffhausen. 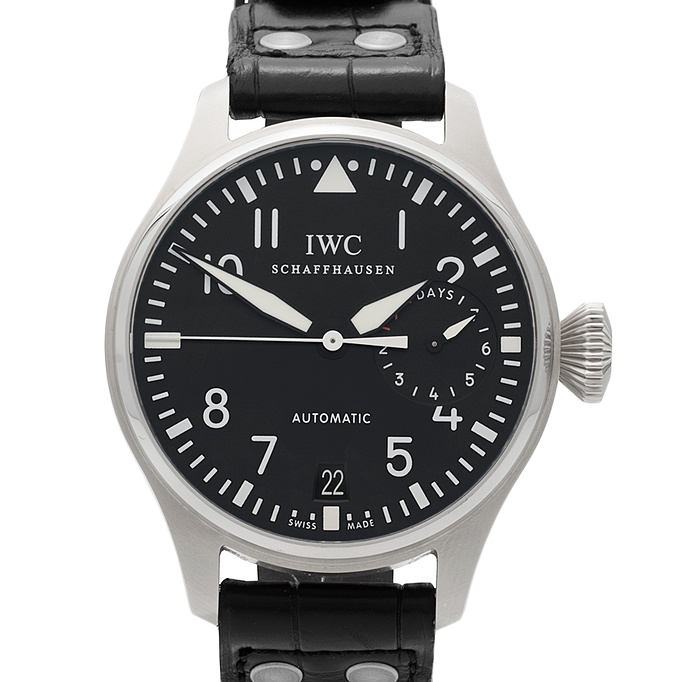 Breitling gained fame with their foray into aviation when they introduced the Breitling Navitimer, a pilot’s chronograph watch with a slide-rule that allows for numerous calculations related to aviation to be made. This, of course, was highly useful for pilots, who could now effortlessly complete those computations with their wristwatch. In this day and age, onboard computers have taken over the duties of making critical calculations, but the Navitimer has preserved its cult status amongst modern pilots. 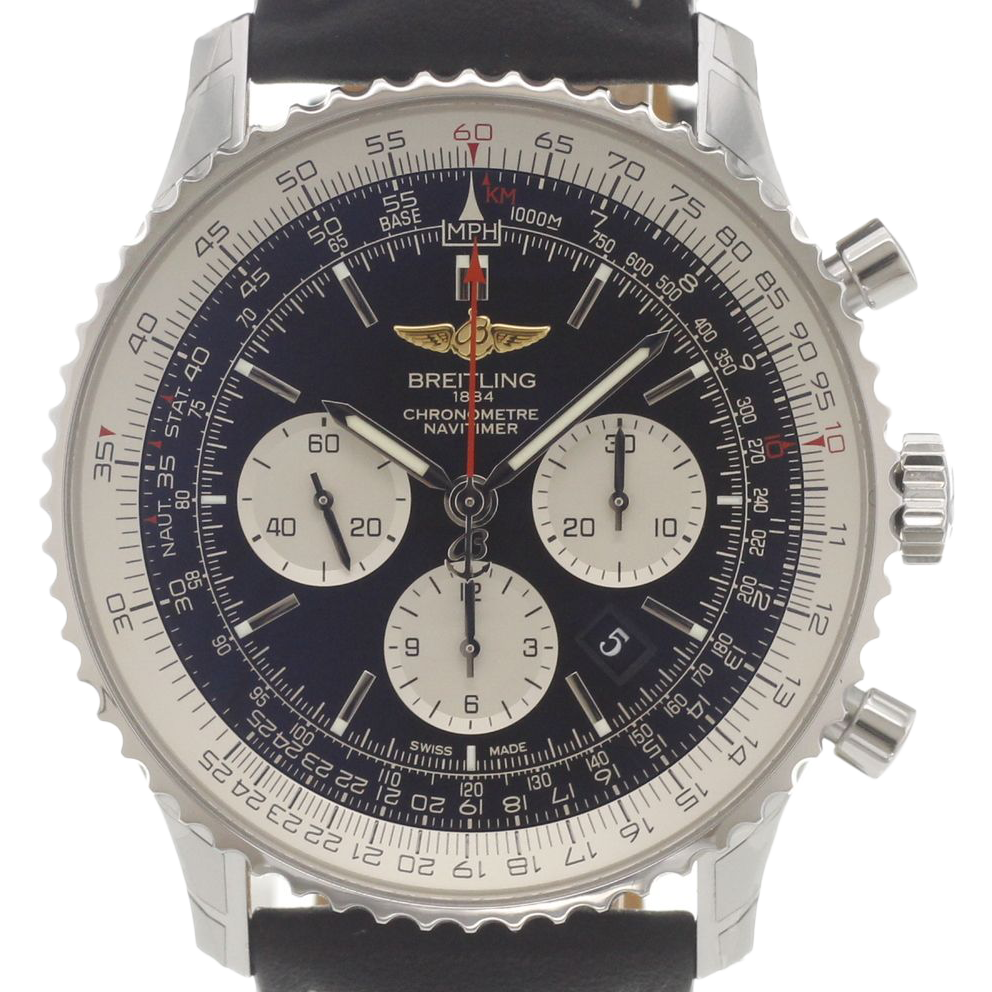 With the introduction of the Breguet Type XX Aeronavale, the Swiss had brought a chronograph with a practical flyback function to the market. The Breguet pilot’s watch first appeared in 1954 and since then has been offered in updated versions. The watch combines a sporty and modern design with the skilled craftsmanship of one of the most famous watchmakers in the world. 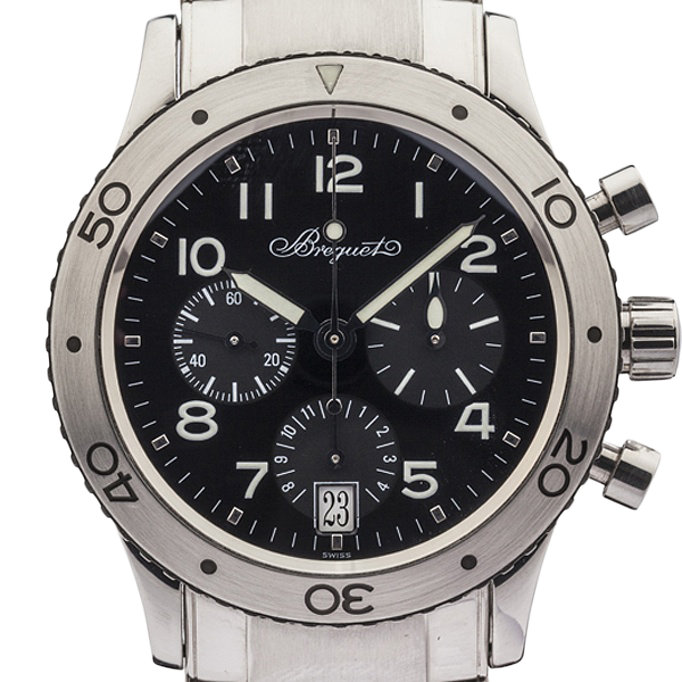 We can’t exclude the Sinn 356 Pilot from this list. From its inception, Sinn-Spezialuhren was determined to produce functional but affordable pilot’s watches of the highest quality. The Sinn 356 PILOT epitomises their philosophy centred on reliability. In 2016, Sinn also developed their own DIN-standard for pilot’s watches. 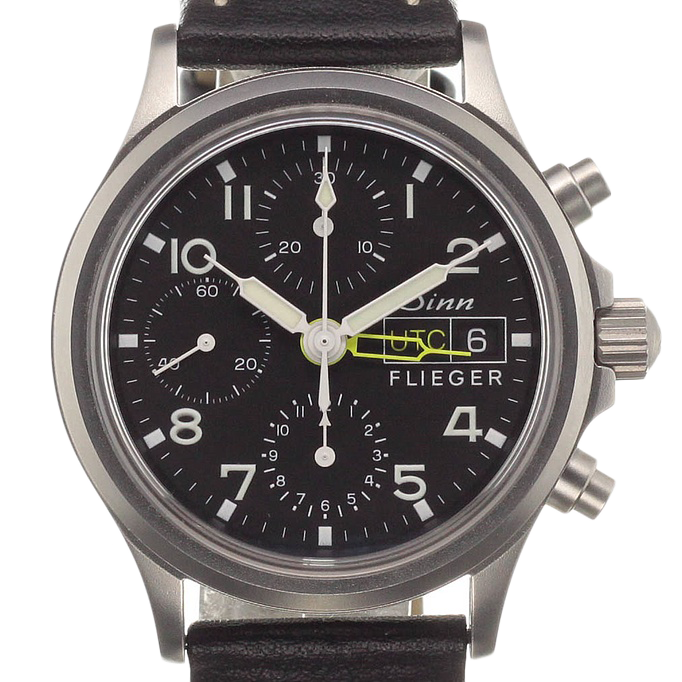 Longines was another brand that created watches for aviation. To be exact, they introduced the Longines Lindbergh and the Longines Weems, navigational watches, which were developed with the help two aviators of the time – Charles Lindbergh and Philip van Horn Weems. With their help, these pilot’s watches became fundamental tools for the pilots of their day; pilots were able to more easily read the longitude with the “hour angle” in order to determine their position in the skies. 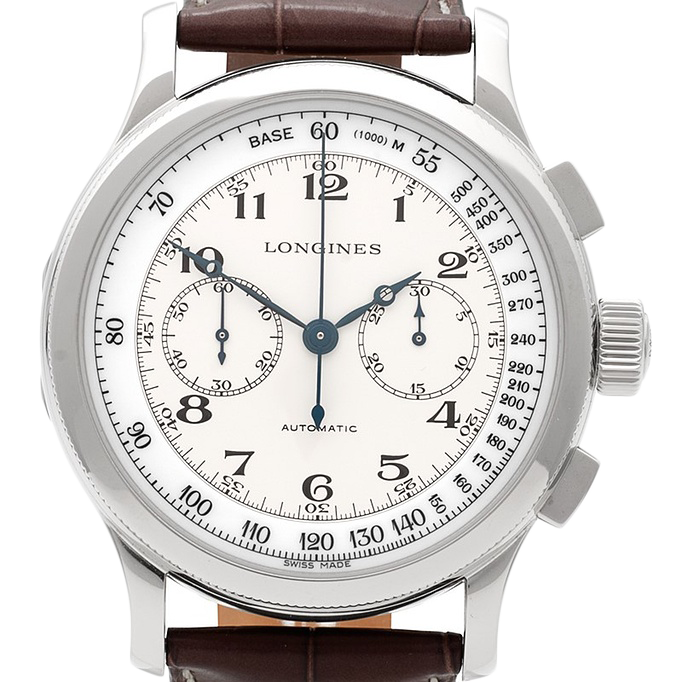 The Tutima Fliegerchronograph 1941 is a prototypical military watch, known especially for its sturdiness and reliability. This chronograph combines military precision with timeless design. It is no wonder watch enthusiasts are drawn to this pragmatic pilot’s watch. 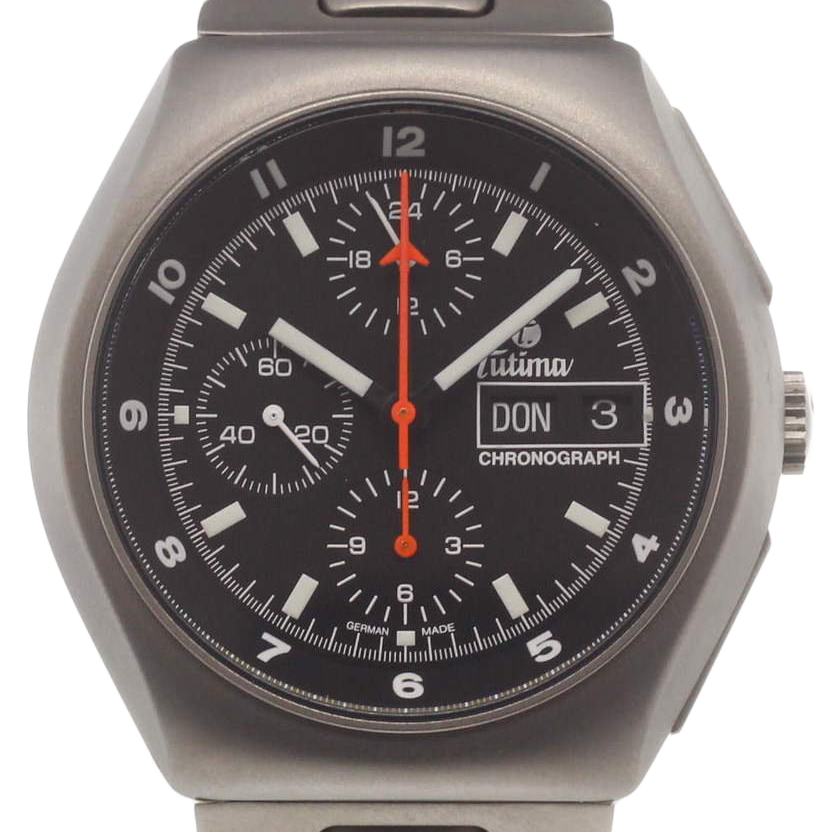 In 1909, the aviator Louis Blériot became the first person to cross the English Channel via aircraft. It took him 37 minutes to achieve this great feat, flying 40 kilometres from Calais in France to Dover in the United Kingdom. During his flight, he had no other than a Zenith watch strapped to his wrist. To this day, Zenith has continued their tradition of creating impressive pilot’s watches and their “Pilot” collection, with its various Type 20 models, provides rugged watches on the one hand, as well as fine jewelled models on the other. You can be assured that these watches provide the highest accuracy and reliability, living up to Zenith’s high-quality standard. 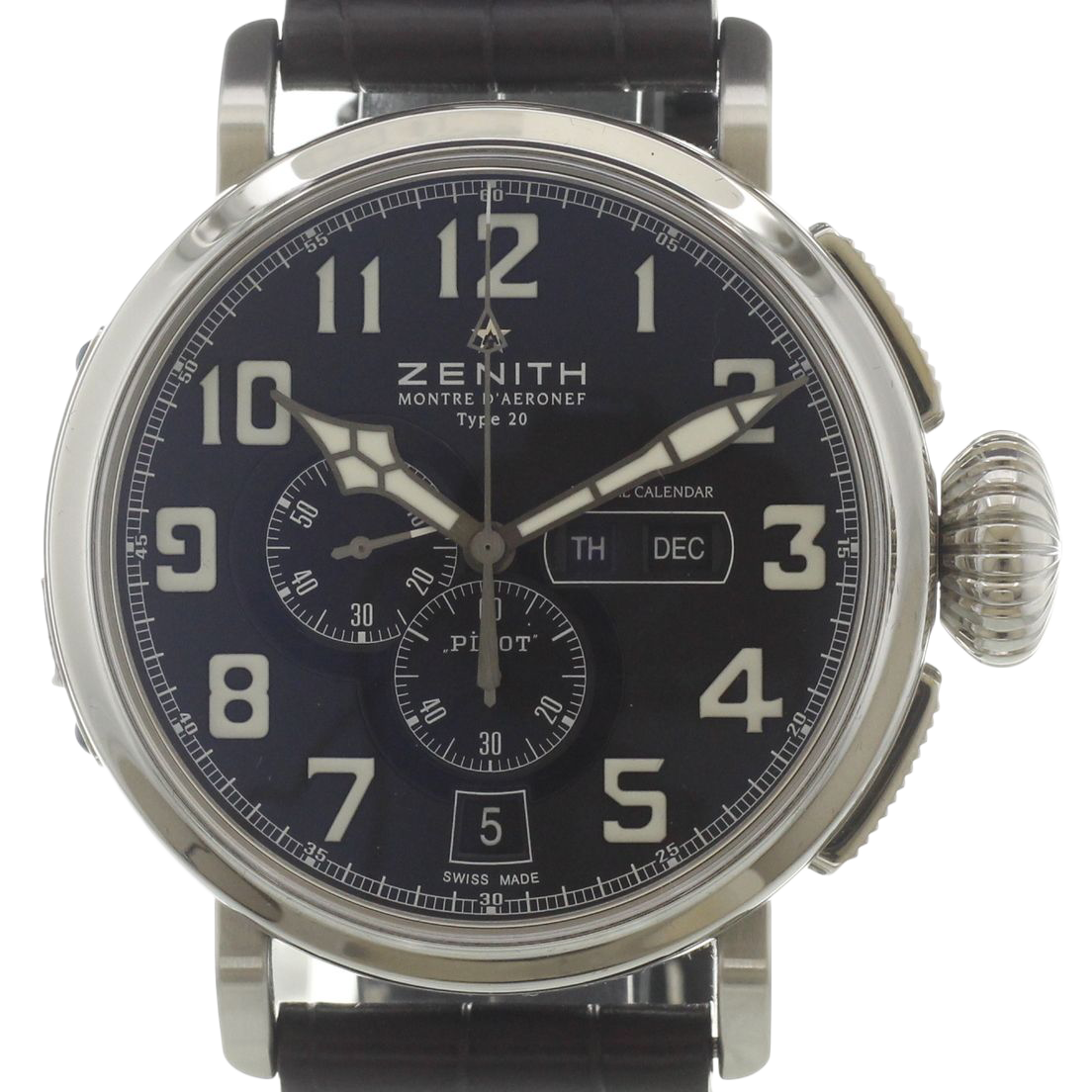 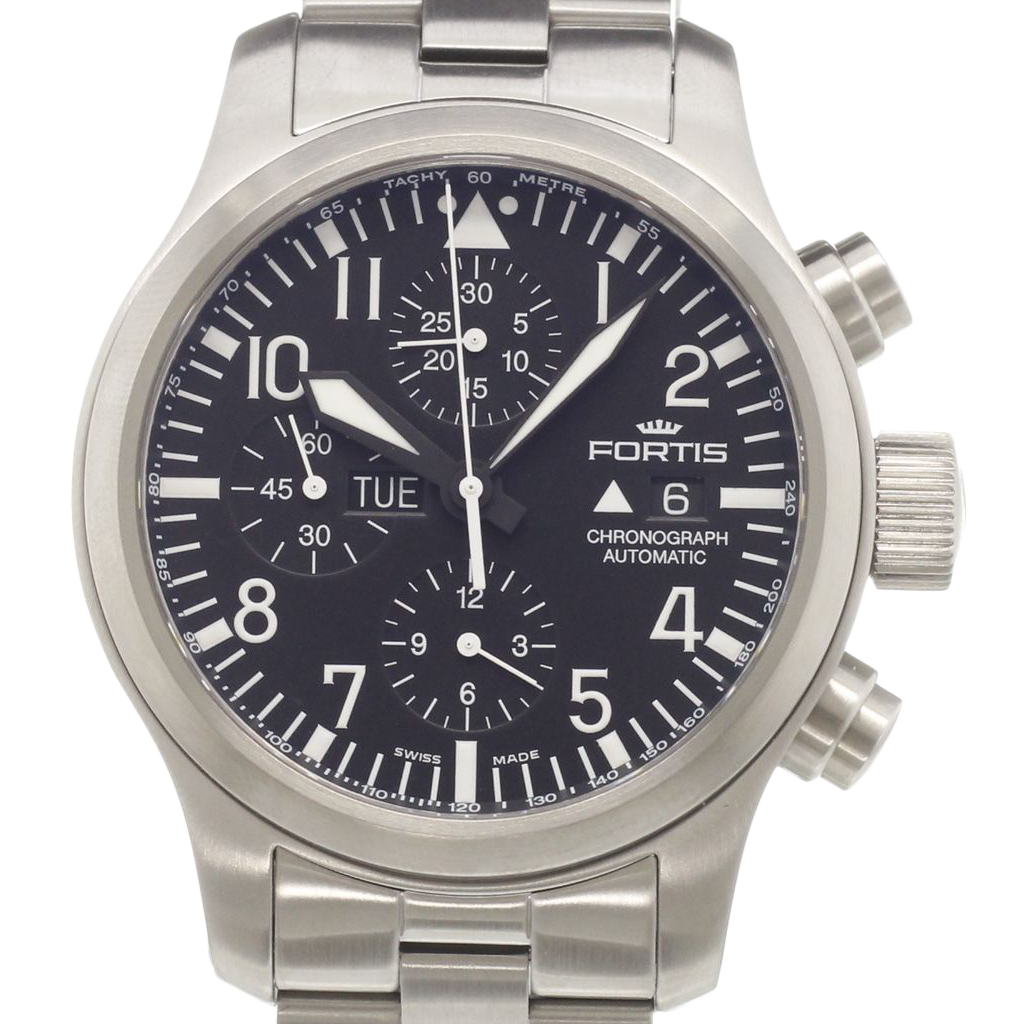 Hanhart is especially well known for their high-grade chronographs. Their unmistakably striking features – the “bicompax” display, red marking and cathedral hands – are a trademark of their brand. Their history spans back to 1882 when the company was founded in the northeast of Switzerland. Not too long after, Hanhart relocated to Germany, where the company manufactures their watches to this day. The Twindicator is the exclusive highlight of the Pioneer collection thanks to the very distinctive features that Hanhart proudly defines themselves by. 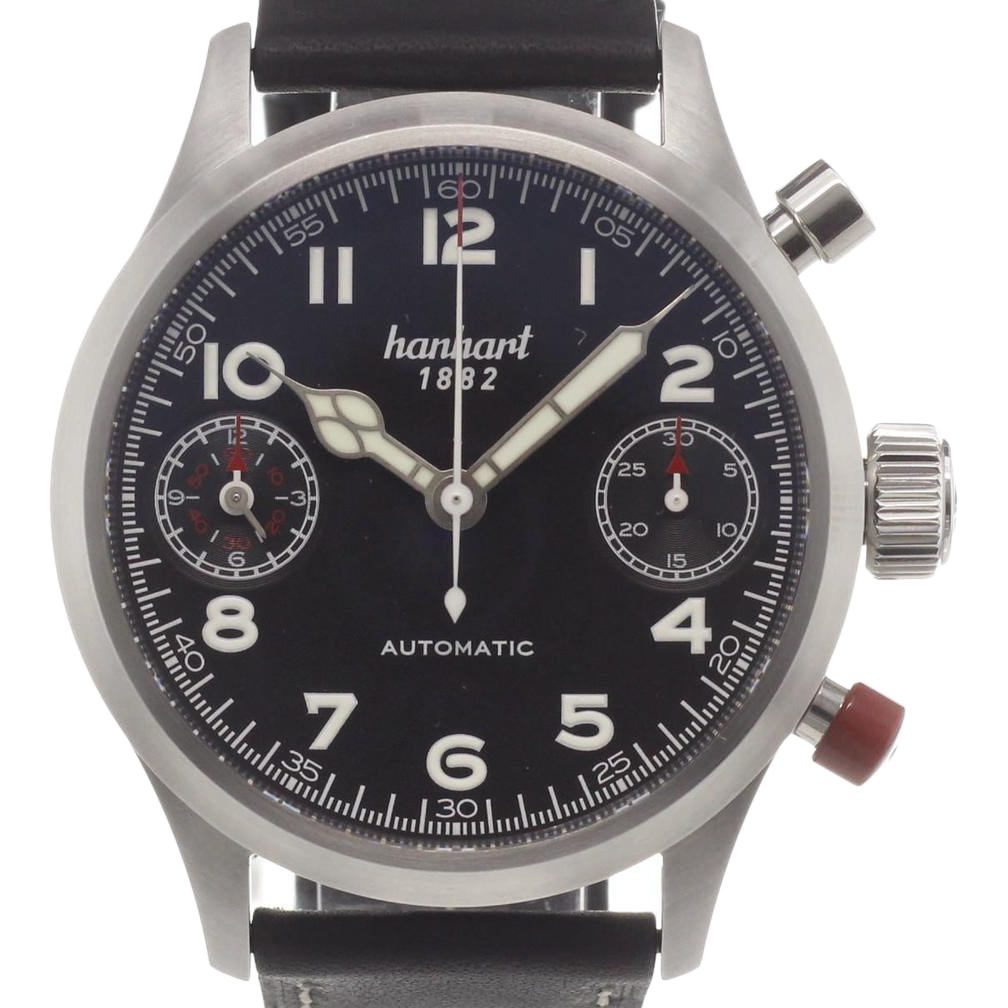